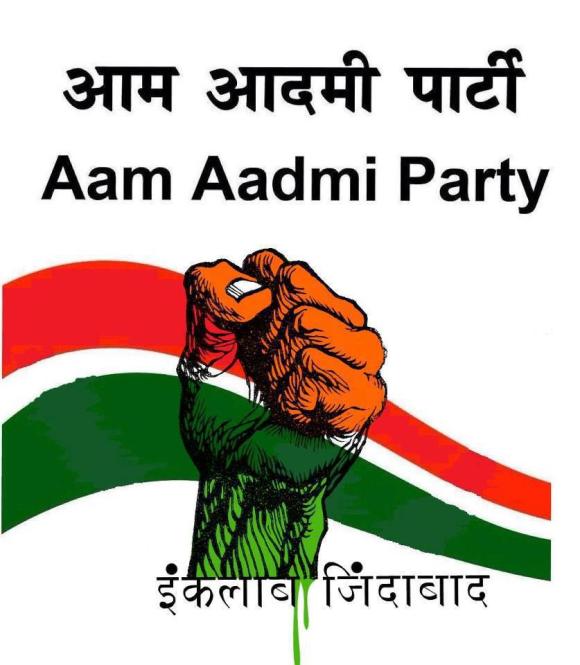 In the recent times, nothing has been more politically significant as the rapid growth of the Aam Aadmi Party in India. Due to rampant corruption by the current ruling dispensation in India,  there were widespread protests organized last year by a deeply frustrated and growing middle class. With incessant plunder of everything and anything of value in India, the growth story of a country that only till 2004 was looked upon with much reverence world over was effectively stunted. These non violent protests was led by the octogenarian Anna Hazare and a host of civil activists. All the political parties in the ruling coalition of India were hand in glove in opposing this movement since the primary objective of the former was in exposing the misdeeds of the latter. The principal opposition party of India which was responsible for one of the highest growth periods in India’s history ensured that this movement was well supported politically. Many members of the BJP and RSS ensured that this movement was not quashed by the ruling dispensation which was accustomed to quelling protests such as these by tact or force.

During this period, the world was seeing a plethora of political activism in almost all developing countries. Bolstered by a rapid growth of technology and social media, these movements flared effortlessly. It was the same case in India. The ruling dispensation in India tried all they could to break the agitation. Having been well versed with pursuing a minority appeasing and a centre-to-left agenda that relied heavily on handouts and subsidies, the ruling party effectively infiltrated this genuine movement with their supporters to ensure that even if the party was compromised, the dynasty that this party stood for and was led by, wasn’t compromised. A political strategy was developed where political overtures were made by certain members of the movement to fight for its ideals in the political forum. Thus a movement that was born out of Gandhi’s non-violent movement took a political turn. This caused rifts in the organizers and among the people of the movement as a political outcome was never the motive but the creation of a strong anti-corruption machinery.

The rise of a nationalist politician in India, Narendra Modi frightened the various NGO’s who have been actively working for the Balkanization of India. With their friends in the media, these groups understood that their only means of survival was in hijacking the splintered anti corruption movement. With heavy funding by the Ford foundation, these supposedly non-political groups suddenly became the fore-bearers of this movement. The ruling Congress party led by a wily leader ensured people closest to her was part of this new political dispensation that suddenly grew enormously from its humble origins.  Everybody who realized that there was an opportunity to be part of a political movement that dint have any ideology suddenly began harping on this bandwagon. Loyal supporters of the ruling dispensation frightened with the astronomical rise of Modi coupled with their inability to effectively pin him guilty to Gujarat riots suddenly became overnight evangelists of this new movement. Arvind Kejriwal who was part of the troika that led the movement along with Kiran Bedi christened this new party with an apt title ‘Aam Aadmi Party’ or the ‘Common Man’s’ party. Arvind Kejriwal, a Ramon Magsaysay Award (an award funded by the Ford Foundation) winner was the only seemingly respectable person in a party formation dominated by highly dubious people.

Riding on a strong anti-Congress incumbency, this new political party finished second in the first election it ever contested In the state of Delhi (which is also the national capital of India). Suddenly the left-leaning liberals, the NGOs, the anti-nationalistic and noisy Indian media found for themselves a ray of salvation. However this party never had a mandate to rule but was egged on by outside support from the Congress party to rule Delhi. In a cruel twist of irony, the infant political party took support from the very corrupt  dispensation that it had vehemently opposed at one time.

Three weeks into ruling Delhi, the party has shown its political immaturity take the better of its efforts to showcase itself as a viable political player.  But these acts can be easily pardoned by any political observer. But what is alarming is the anti-India and furthermore the anti-democratic stand reminiscent of Stalin’s Politburo being taken on various issues by members of this party.

Being a silent observer of Indian politics, I feel disappointed at the turn of events. For an anti-corruption movement that sparked the imagination of the entire world, when similar political movements took a violent turn worldwide, to disintegrate into a masked version of the radical left is pathetic. Here a golden opportunity to redefine the way politics was being conducted in India was so effectively squandered. The opinion of the fastest growing middle class in the world was twisted and ripped off mercilessly to meet nefarious objectives.

I still believe that AAP has a glowing chance to rebound. They need to stop this relentless and merciless media posturing and shut themselves from everything and everyone to re-define clear objectives and ideals. A strong centre-to-left or left leaning agenda needs to be developed and showcased to the Indian population and diaspora. They need to build a party of strong anti-corrupt foundation that returns democracy to the electorate. They need to iron out all their ideological differences and just as they pledged to fight from within the system for its betterment, they need to do it convincingly and with strong commitment. Without these beliefs, just as Tahrir Square unleashed anarchy on the poor Egyptians, this party might end up being something similar.

[…] club is determined to drive home his message of good governance and inclusive development. The other is the former administrative official Arvind Kejriwal who is driving a strong anti corrupt…Both are anarchists in my opinion and it will be interesting to watch in the coming months as to […]