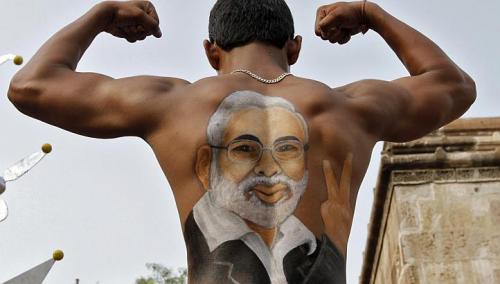 Last Friday, September 13th 2013, the chief minister of Gujarat, Shri. Narendra Modi was crowned as the BJP’s presidential candidate for 2014 General Election. This decision by the principal opposition party of India to anoint a highly polarizing figure of Indian politics, has been welcomed across the country with jubilation and acclaim. Ten years ago, this same person was accused of playing the fiddle while his state burnt in the aftermath of riots.

A week is a long time in politics, and hence a decade-an eternity. During this time period, while his accusers happily looted the country and destroyed every single establishment of this democratic country, Modi worked hard to ensure that his state remained prosperous and development oriented. It was tough since he was an untouchable in politics due to the riots; being the son of a tea vendor, he was an outsider in the Lutyen’s bred caste of politicians in India. In order to understand how important his coronation is, one needs to understand the Lutyen’s bred caste of politicians.

As mentioned in this blog post earlier, there has been a concerted effort since colonial times to ensure that the affairs of India lay in the hand of a privileged few. It is so astounding that one family has literally ruled India for more than three quarters of its time as an independent nation. This very family has promoted a culture of nepotism, corruption, communal appeasement and sycophancy the likes of which have never seen anywhere else in the modern world.

India today is floundering. As the wheels of time move to a new dawn, when the Asian dragon and tiger come relevant as world powers once again, the tiger is being slowly decimated due to well orchestrated struggles from within.

Narendra Modi has been thrust into these times when the hardworking Indian middle class, rendered toothless and spineless for ages, is frustrated with a country in decline due to its own doing. Stories of rapes, corruption scams and scandals fill the news headlines each day. The growth story of the country has already been stunted. Should Indians all around the world and in the country sit and watch what is happening, or change history this time around ?

Barack Obama was an outsider in the Washington nitty gritty political scene. He was elected in an amazing campaign to be America’s first black president by an electorate desperate for change. He inherited a country in shambles, burnt by two expensive wars and an economic recession caused by greed. In his second term as a president, the unemployment numbers are falling and US is on track to be an energy superpower by 2030.

The present Congress party that rules India from an umbrella of coalition is filled with people whose only objective is to cling on to power at any cost. For them the country is immaterial, the societal progress is unwarranted and the upliftment of the people immaterial. It is India’s time to change from the demons of its past, learn from its mistakes of history and forge a new future of hope.

I have tried to do the best in every circumstance that I have been thrown into. Blogging is one of them. View more posts

One thought on “What does Modi’s coronation mean for India?”